I was more than a little nervous, going into work on Thursday morning, April 20, because my Speculative Fiction Studies students were speaking with Amal El-Mohtar. I was excited, grateful, hopeful, and yes. Terribly, deeply nervous. I should point out that there’s nothing about Amal that should make anyone fearful, apart from her talent, her enthusiasm, her accomplishments, her erudition, her grace —

No, scratch that. I was anxious about my students – and, let’s be honest, me – having a good showing with Amal because she’s very much to be admired. One never likes to let down one’s heroes. So I told myself what my mother always told me about fear and success: “You only feel so awful because you care so much. It would be wrong if you didn’t.”

My students read Amal’s “The Truth About Owls” as part of their homework and were ready to speak to her through a Twitter AMA on the hashtag #AMALowl. It seemed a perfect plan: low-impact ‘face time’ between a writer and students familiar with her work, with the technology free and practically foolproof. But though the questions the students shared were thoughtful and sincere, and Amal dove into answers as fast as anyone could expect a lone writer on a mission to do, the disconnection of an asynchronous conversation felt a bit wrong.  In a previous, totally spontaneous AMA, Alyssa Wong and Brooke Bolander had been able to tag-team their way through half a class period of discussion. Two against twenty had worked out much better than twenty-to-one odds, as I might have realized if I had used my tactical brain more and my fangirl brain less.

Fortunately, in a quick DM session after, Amal raised the issue that would turn things around for the afternoon: “That was super cool! I hope the answers were ok! I’m sliiiightly regretting not actually doing this over skype because some of those questions definitely deserved more thought-through answers! . . .What do you think pedagogy-wise? I will totally do what’s easier for you / better for class!”

It was the right question — a better question than “Will this go okay?”, which had been the only place I could make my brain focus all morning. Instead, Amal asked what it would take to make the teachable moment itself better. She assumed (rightly) that it would be okay. And it had been. But she also sensed it could have been better.

So, we switched tracks and arranged a Skype call for the afternoon.

As the students on my side of the call gathered (freely sharing expectant looks, without a webcam to capture them all), they looked over the questions they’d written with Twitter in mind and started revising on the fly. More words, nuances, ideas. Amal was a gem, putting up with bad audio and not seeing her audience’s faces as if it was part of the fun.

I wish she could have seen the kids, because they were all smiling.

The conversation really broke open about five minutes in, when a student walked up to my laptop mike and asked, “Why did you decide to leave it ambiguous whether Anisa’s power is real or not?”

It was a joy to watch Amal’s face, already smiling, fill with a sudden light.

“That is. . . you know, that is actually a great question, because usually people want to know which it is –is there a power or not? And I don’t like to answer that because you’re right. I did that on purpose. And I guess it’s because. . .”

And on she went, the student nodding back at her the whole time.

If only she could have seen it.

It’s not often readers have the chance to ask a writer why they make certain choices. But that shouldn’t keep us from asking ourselves different, better questions as we read or work. The student could tell that if Amal had wanted her audience to have a clear sense of what was and wasn’t real in her story, she’d have written that way. She’s well more than capable. So the important question clearly wasn’t what’s the binary ‘truth’ in “The Truth About Owls.” The question was, what does the story gain in its ambiguity? What does it offer its reader, through whatever lens we pick up?

When I write, what questions am I asking myself, and how will they help me get to something beyond the next plot beat? What questions do I hope my readers would ask me, if I were the one on the other side of a chat screen? It’s something I’ll be thinking about tonight as I settle in to draft another chapter of The Nine’s sequel.

At that moment, with Amal almost laughing at the simple beauty of a better question, my daylong nervousness finally washed away.  Between Amal’s question about what would make things better for the students, and my students’ questions about what they’d read, it was clear everyone in the room had gone beyond the obvious to the essential.

That’s what the best writers coax their readers into doing.

Thanks for showing us that, Amal. 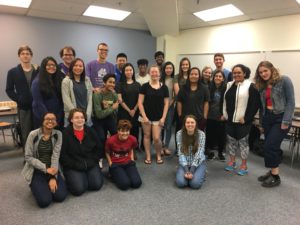